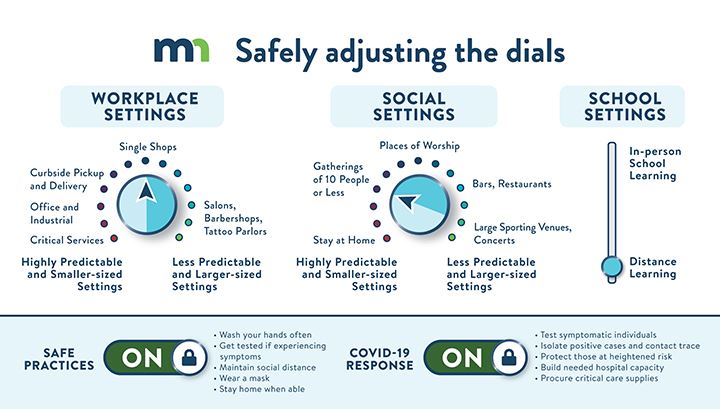 The next phase of the state's COVID-19 response, Stay Safe MN, began on Monday, May 18. The order encourages Minnesotans to stay close to home, but allows gatherings of friends and family of 10 people or less. Social distancing with masks, handwashing and other safety measures are encouraged to help protect one another.

All city facilities, including Roseville City Hall, remain closed to the public until further notice. Much of the city’s workforce continues to conduct City of Roseville business from remote locations, with some city services available by appointment. Essential staff such police, fire, emergency medical response, and utilities remaining on duty and continue to serve the community.

The following is the status of City of Roseville events Through August 4, 2020.

Due to the dynamic nature of the COVID 19 pandemic, all events listed are subject to change. We encourage you to check back often to view the status of city events.

In compliance with Phase II of Minnesota Governor Tim Walz’s Stay Safe MN order, summer concerts at the Frank Rog Amphitheatre through July 4, as well as the roll-in movie planned for the OVAL on June 12, have been canceled. At this time, Summer Entertainment performances at the ROG and roll-in movies scheduled after July 4 are tentatively scheduled to move forward.

In May, the city announced that it has cancelled most events planned for the annual Rosefest celebration.  Included among the announced cancellations are the city’s popular 4th of July Party in the Park and fireworks show over Bennett Lake on Saturday, July 4 as well as the Run and Roll for the Roses on Saturday, June 27, and the Rose Parade on Monday, June 29. Rosefest events not cancelled are listed below.

August 7
Roll-in Movie at the OVAL: Secret Life Of Pets 2

During the COVID-19 pandemic, the City of Roseville is conducting all City Council and Commission meetings virtually via the ZOOM webinar platform. Those meetings not being conducted virtually have been cancelled, including all non-city meetings scheduled to be held at city facilities. Members of the public interested in participating in a City of Roseville meeting should visit the city's Attend a Virtual Meeting webpage for registration information.

Variance Board and Planning Commission

All Roseville Parks and Recreation programs will be analyzed on an ongoing basis and move between status categories – Programs Running with Modifications, Tentatively Moving Forward with Modifications, Awaiting More Information, Canceled – as more information becomes available. For the most up-to-date information, please visit the Parks and Recreation 2020 Summer Program Updates page.