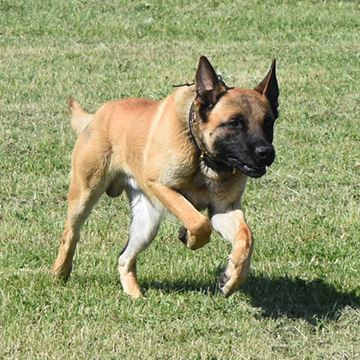 Meet Cal
Cal is a Belgian Malinois from the Netherlands. He and was born in May of 2019 and loves being at work and playing fetch.

Cal has a very calm demeanor when not working or playing, but is a highly driven and intense dog when it is time to work or play. He is incredibly agile and athletic – he jumps high and runs extremely fast. Cal is not a fan of his days off, having downtime in his kennel, or taking baths.
About Officer Christensen
Cal's handler is Officer Mitch Christensen. Officer Christensen has been with the Roseville Police Department since 2010, when he joined RPD as a Reserve Officer. In 2012 he began serving as a Community Service Officer, and in 2014 he became a sworn Police Officer.

Growing up with a police dog at home and then working alongside dogs early in his career, Officer Christensen quickly developed a strong interest in pursuing this specialized position. He also quickly realized the culture of excellence that existed in the RPD K9 unit and was excited and honored to be selected for this challenging but rewarding position. He understands that it takes a lot of work to maintain the high standards set by the previous handlers. 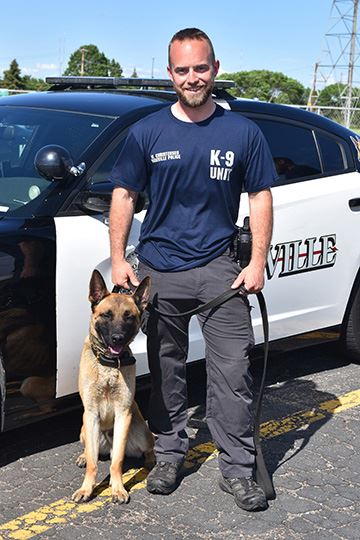 Officer Christensen says...
It was amazing to see Cal develop into a working police dog over the course of his training, and I’m excited to continue working with him as we both refine our skills and continue to grow. Cal will provide me with the opportunity for more positive interactions with community members teaching people about the work we do together.

Despite all of the great advances in technology that have benefitted law enforcement and improved public safety, nothing can replace a police dog (yet). When someone does something terrible to someone else and runs into the darkness, there is no device or tool that can arrive in the area a minute later or an hour later and show us the path that person traveled after they disappeared. When asked, these dogs will literally drag us towards danger, and vastly improve our odds in apprehending those who pose the greatest threats to public safety.

Roseville Police K9’s have historically made a huge impact on improving community relations while protecting community members and police officers. I can’t wait to see Cal have a positive impact in those areas.
More
[]